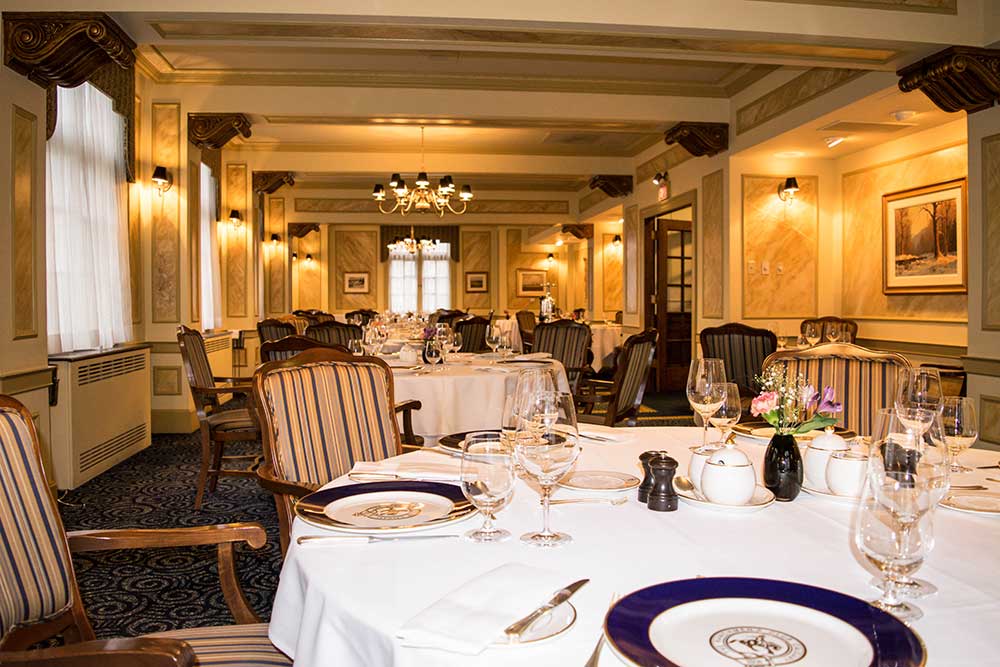 The Club's signature A.E. Cross Dining Room is known for being one of Calgary's finest dining experiences. Located on the second floor, in the original 1914 section of the Clubhouse, this dining room offers a formal atmosphere enhanced by some of the Club's best original paintings. Chef's À la Carte dining room dinner menu provides a wonderful choice of members' seasonal favorites and many new items, including monthly dinner features. An experienced and knowledgeable Dining Room Manager welcomes members and guests in a warm atmosphere of sophisticated hospitality.

This room is named for A.E. (Alfred Ernest) Cross (1861-1932). Cross was one of the Club's Founding Members and an earlier President, and one of Calgary's Big Four who founded the Calgary Stampede in 1912. Originally, Cross moved to Alberta in 1884 from Montreal as a veterinary surgeon working at the Cochrane Ranche. By 1886 he had his own A7 Ranche, which today still remains in the Cross family, run by the fourth generation Ranchmen's Club member, John Cross. A politician (MLA for East Calgary), businessman, and brewer; A.E. Cross established the Calgary Brewing and Malting Company in 1891, the first brewery in what was then the Northwest Territories. He married North-West Mounted Police Commissioner Col. James Macleod's daughter, Nell (Helen), in 1899, and they had several children, including their daughter Mary named after Nell's mother, for whom the small private room adjacent to the A.E. Cross Dining Room is recognized.

The dress code in this room is Business Attire. 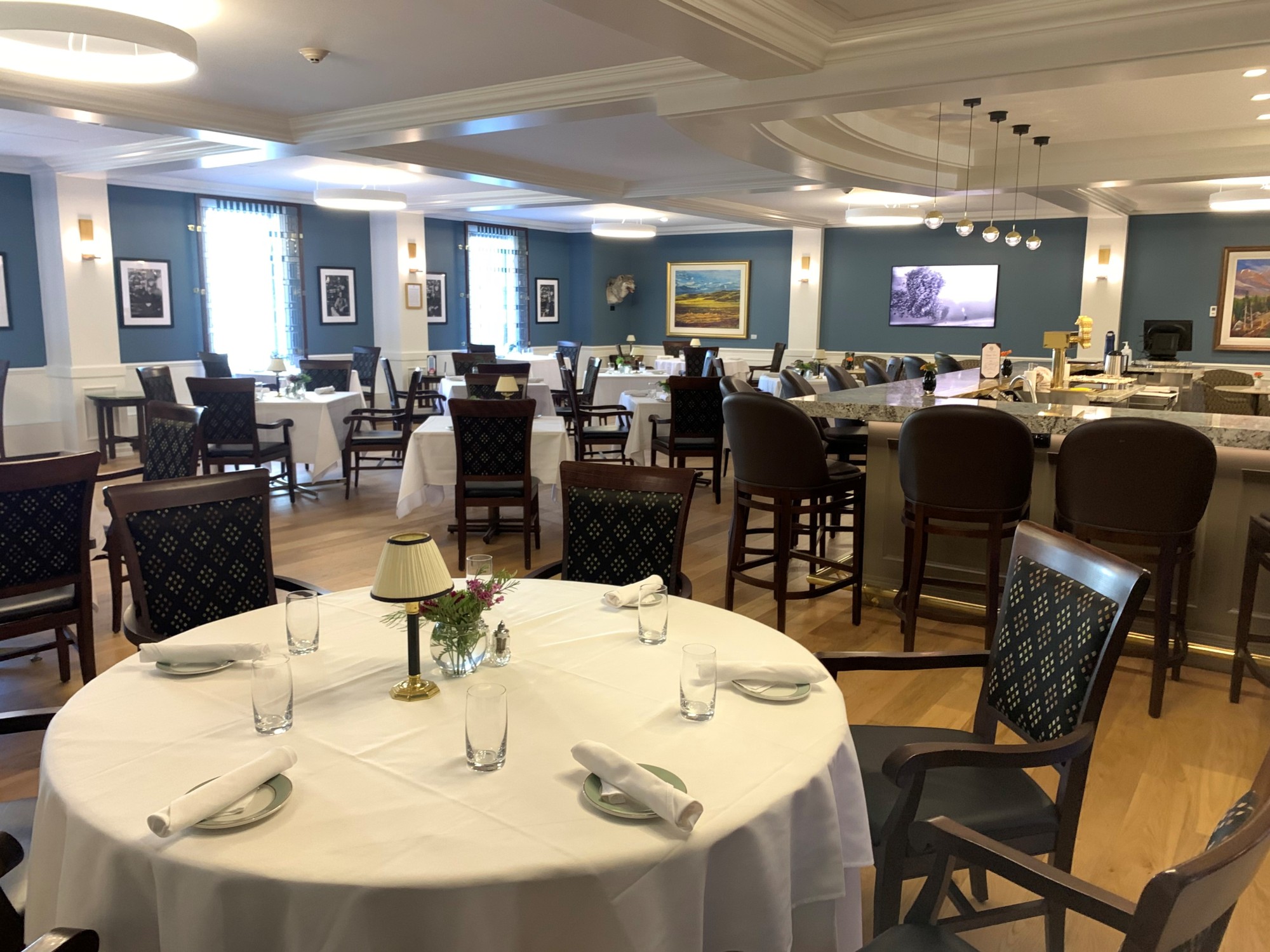 The Wolves Den is the Ranchmen's Club's casual dining area and serves as the Club's bar. It is open six days a week and features an all-day a la carte menu. This room offers a variety of seating and table styles, including dining as well as cocktail tables and chairs.

Donated by architect Michael Everett Evamy (1991) and fabricated by Rubaiyat Stained Glass Studio (Calgary), the window treatments found on the three, north-facing windows in the Wolves Den, incorporate design elements representative of the CPR rail lines, train wheels and the original railway car "The Wolves Den", in which early 1880's ranchers met for socializing and cards. This railway car is where the idea of a permanent Ranchmen's Club was born. Photographs of some of the founding members in that same railway car are displayed between the beautiful stained glass windows. All new pieces of artwork added to the Club's collection are showcased in the Wolves Den, before being relocated throughout the Club. Some of the Club's most impressive larger paintings hang here.

The dress code for the Wolves Den is Business Casual 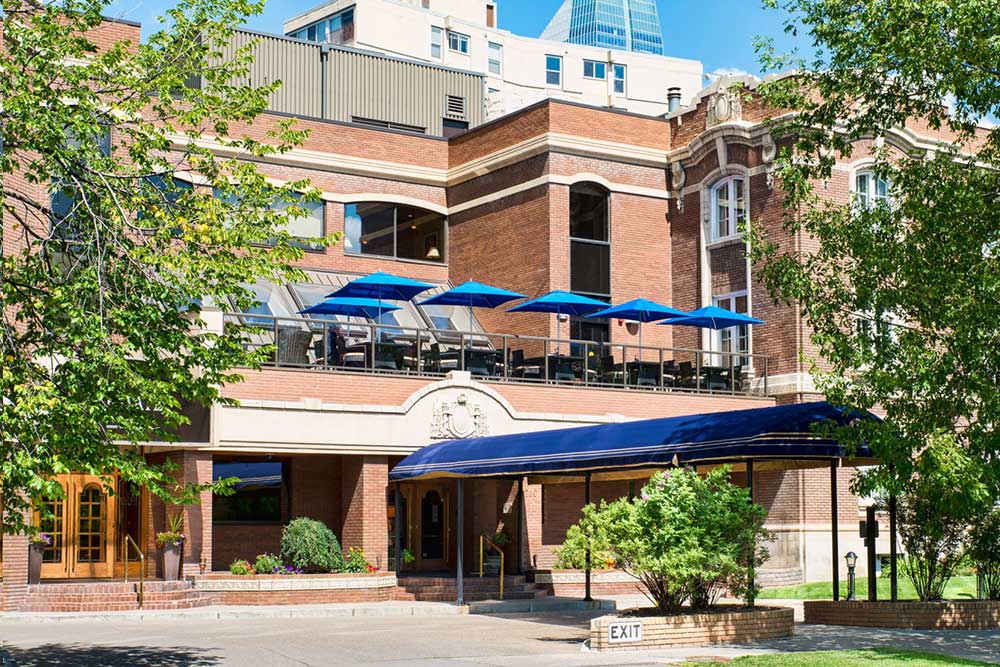 An oasis for members and their guest, our Terrace is one of the most exclusive patios in the city. Located on the second level on the front of the clubhouse overseeing the Lougheed House and gardens. Our Terrace was built in 2016 to celebrate the 125th anniversary of the founding of the Club and it is open weather-permitting every day throughout the summer days. The bright, airy terrace is an exciting environment where the chef and the kitchen grow their own herbs and is also a venue ideal for a sunny brunch or dinner. This space adds a whole new level of enjoyment for members and their guests to escape a summer workday with after work cocktails during our happy hour and unwind with our summer music series.